Paschal Message of Patriarch Kirill of Moscow and All Russia to the Archpastors, Pastors, Deacons, Monastics and All the Faithful Children of the Russian Orthodox Church.

Your Graces the archpastors, reverend pastors and deacons, all-honourable monks and nuns, dear brothers and sisters:

On this chosen and holy day, full of Paschal joy and glorious light, the life-affirming glad tidings are being passed on from mouth to mouth, from heart to heart: 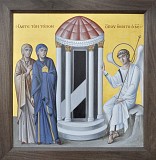 On Monday, March 15, 2021, the first day of Great Lent, Archpriest Viktor Tseshkovsky, cleric of the Western American Diocese and Rector of Protection of the Holy Virgin Russian Orthodox Church in Hollywood, CA, died at the age of 62.

Two of the three churches of the Russian tradition in Los Angeles are located in Hollywood. Of them, Protection of the Holy Virgin Church is closest to Hollywood's landmarks. Fr Viktor was from the Kamenko-Dneprovsk region of the USSR, and during the decade between 1982-1992 he served as Rector of St Alexander Nevsky Cathedral in Melitopol.

Fr Viktor was drawn to the Church from an early age, loving the church temple and divine services. All five sons of his parents became priests, and his sister is married to a priest. They all served in the Crimean and Dnepropetrovsk Dioceses....

DVD Tutorial: Serving the Divine Liturgy of the Presanctified Gifts - 03/09/2021

As we approach Great Lent, at the request of several clergy our Diocese and with the blessing of His Eminence Kyrill Archbishop of San Francisco and Western America, the following DVD Tutorial on serving the Liturgy of the Presanctified Gifts is being made broadly available through our Diocesan media.

This presentation by Archpriest Alexis Kotar of St. Nicholas Cathedral in Seattle, Washington, was originally given at the 2006 Lenten pastoral retreat of the Western American Diocese (ROCOR). It is presented here, enhanced with additional footage of the service, for the instruction and edification of clergy and those wishing to learn about the structure of the Divine Service.

Fr. Alexis begins with the historical roots and development of this unique Lenten Service. His lecture helps us understand why we...