Deacon George Kalousek of Saint Herman of Alaska Church in Sunnyvale, CA, reposed in the Lord The Reverend Father Deacon George Kalousek reposed in the Lord on the great feast of the Annunciation of the Most Holy Theotokos, March 25/April 7, 2022.

George Kalousek was born on July 11, 1937, in Shanghai China where as a child he attended the Shanghai British School.  At the age of 12, he moved to Rio de Janeiro, Brasil, where he later earned his medical degree at the University of Brasil.

In 1962 he came to the United States to complete his medical training at Michael Reese Hospital in Chicago. 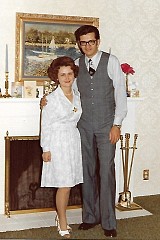 After wedding Natalie Goros in San Francisco in 1963, the two settled in Chicago for their first years of marriage, but ultimately returned to California permanently in 1967, soon thereafter becoming parents.  In 1968, they had their first daughter, Nadia, and in 1969 their second daughter, Angie.

George was the Chief Resident for Stanford University at the San Mateo Medical Center until 1972 when he went to work as an internist at Kaiser Hospital in Redwood City and the family bought a home in Menlo Park.

Dr. Kalousek's interest in Orthodoxy was kindled in 1977 through meeting an Orthodox priest, Father John Ocana, rector of the Orthodox Church of Christ the Redeemer in Los Altos.  George was also greatly inspired and influenced by  Hieromonk Seraphim (Rose) of the St. Herman of Alaska Monastery in Platina, CA. Dr. Kalousek became a key figure in the establishment and founding of St. Herman of Alaska Mission which began in a rented hall in Palo Alto, CA, and which later relocated to Sunnyvale, CA, and was renamed St. Herman's Orthodox Church. 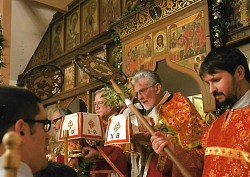 Dr. Kalousek was eventually called to serve the Church in Holy Orders, initially as a Reader, then as a Subdeacon, ultimately being ordained to the Holy Diaconate in 2008.  Father Deacon George served for 8 years at the Protection of the Holy Virgin Church in Palo Alto, CA, with his beloved friend and spiritual father Archpriest Vladimir Derugin. Father Deacon's thirst for serving in the English language and his desire to serve the church he founded led him back to St Herman’s Orthodox Church in 2015, where he served with Archpriest Martin Person and later, until his repose, with his godson Priest Andrew Gliga.
Father George was instrumental in the organization and proper enactment of Divine Services at St. Herman’s Orthodox Church.  He spent a large portion of his retirement writing instructional manuals for the choir and clergy which included the Funeral Service for the Laity, which aided those serving at his own funeral on Tuesday, April 12, 2022.Father George reposed peacefully at his home on the Feast of the Annunciation, with Matushka Natalie by his side.Solemn condolences to Matushka Natalie, Father George's children and grandchildren, and to all whom he impacted during his lifetime. And, Memory Eternal to our dear Reverend Father George!