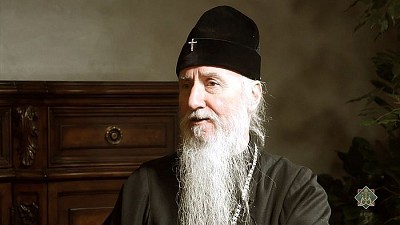 Dear in the Lord Fathers, Brothers and Sisters:

During these terrifying days when streams of blood merge with the flow of deceit and wickedness, we Christians cannot allow ourselves to submit to the spirit of war. The spirit of war is demanding. It requires us to divide into parties. It forces us to hate.

We Christians must understand: the wrath with which war burns is the wrath of hell. The enemy of God drinks in not so much human blood as human bitterness and division. The devil wants nothing more than to separate man from his neighbor, from the Church and from Christ.

This is nothing new. Before the beginning of Great Lent, during Cheesefare Week, the Lord cautions us: “And ye shall hear of wars and rumors of wars: see that ye be not troubled: for all these things must come to pass, but the end is not yet. For nation shall rise against nation, and kingdom against kingdom… And then shall many be offended, and shall betray one another, and shall hate one another… And because iniquity shall abound, the love of many shall wax cold… But he that shall endure unto the end, the same shall be saved” (Matthew 24:6-13).

Ahead of us lies the just Judgment, the all-encompassing Divine Judgment. Those who forget this judge others quickly and carelessly-and this is already war, the ancient war of the devil against God. On whose side shall we stand?

This sermon is addressed to those who serve the Church, and to those who have newly come. The German Diocese is our local Church. Contained therein are priests and believers of various nationalities: Ukrainians, Russians, Belarussians, Carpatho-Russians, Jews, “Russian Germans,” migrants, and the local “native” Germans, Greeks, Moldovans, Serbs, Georgians, Poles, Czechs, Hungarians… Each of us loves our homeland. But the All-Merciful Lord united us, called upon us to establish Church life within this diocese, to the salvation of the present and future generations of Orthodox Christians in this nation. Here we must be the People of God, serving the One God.

If we allow this service to divide along national traits, we will commit a grave, most grave sin-the rending of the living, unified Body of the Church.

It is this rupture, this division that the prince of this world lusts after, and more persistently demands of us.

We recall that it was even demanded of Christ that He present Himself as a political leader and would destroy the occupiers. That He would separate Himself from the Roman invaders and would become the God not of all mankind but of a single suffering nation. And when He did not satisfy them-as many, many thought at the time to be well-deserved and righteous political expectations and imperatives-we recall what those who made these demands did to Him.

Politics always presumes division into “us” and “them.” But the bloodless Sacrifice of Christ is made “in all and for all.”

If our hearts are in disagreement with the words “in all and for all,” then can we partake of Communion? Are we truly Christian?

Let us for a moment lift our spiritual gaze to the heavens. Let us think of the invisible angelic world. The bond with that world is particularly noted by the Church during Liturgy: during the Minor Entrance, the Cherubic Hymn, the singing of “Holy, Holy, Holy…”

But the angelic world is not enclosed by the walls of the church. Even in the heat of battle, under bullets and bombs, when it seems that hell reigns over everything, each warrior is accompanied by his own Guardian Angel, who tends to and protects the person, cares and suffers for him. Demons, the servants of the devil, strive through their hatred to destroy human bodies, and mainly, their souls. The Angels, as heralds of Christ, strive to save each soldier with their love, no matter which side he fights for. And this pain is felt for the mothers praying in church, the wives and sisters of the warriors, praying for the salvation and consolation of the warriors on both sides.

To what shall we open our hearts-to love or to hatred? Whose side are we on this genuine war?

If we are Christians, let us reject the spirit of war which is alien to Christ.

May peace take hold in our hearts-that sole genuine peace which the Savior brought to us already.

Let us follow the Apostle’s call: “Neither give place to the devil… rather… labor, working with his hands the thing which is good, that he may have to give to him that needeth. Let no corrupt communication proceed out of your mouth, but that which is good to the use of edifying, that it may minister grace unto the hearers. And grieve not the holy Spirit of God, whereby ye are sealed unto the day of redemption… Let all bitterness, and wrath, and anger, and clamor, and evil speaking, be put away from you, with all malice: And be ye kind one to another, tenderhearted, forgiving one another, even as God for Christ’s sake hath forgiven you” (Ephesians 4:27-32).

Let us firmly trust in the words of Christ:

“These things I have spoken unto you, that in me ye might have peace. In the world ye shall have tribulation: but be of good cheer; I have overcome the world” (John 16:33).

+ Mark
Metropolitan of Berlin and Germany