Akathist to St. John of Shanghai and San Fransisco On June 27th, 2019, the faithful gathered in the Cathedral of the Mother of God “Joy of all Who Sorrow,” to prayerfully celebrate the Akathist to St. John of Shanghai and San Fransisco the Wonderworker. The congregation was lead in singing the Kontakia of the Akathist by His Grace Bishop Irenei of London and Western Europe and His Grace Bishop Nicholai of Manhattan; their voices were complemented by the other clergy present. Members of the congregation held copies of the service, following the example of the clergy in hymning the memory of St. John.

Everyone present felt the blessing of being able to stand in the cathedral built through the prayers, determination, and inspiration of St. John, and to perform the akathist to his memory.

As the hymns of the akathist soared to the arches of the cathedral ceiling, we were reminded repeatedly that he is still with the flock he protected and lead to this country. Fifty-three years after his repose in the Lord and twenty-five years after his canonization as a saint of the Russian Orthodox Church Abroad, we feel his love. The evidence of his love is apparent in the people who made the effort to be present at the service. Not just parishioners of the Cathedral of the Mother of God “Joy of all Who Sorrow,” but visitors from other jurisdictions of Orthodox churches in the San Francisco Bay Area as well as pilgrims from out of state and even from other countries!

St. John has touched many lives with small and great miracles, but one of the greatest impacts that he has as a saint is seen in the keeping of his memory. This yearly celebration is a joyful uniting force that changes lives and brings us closer to God.

O Holy Hierarch Father John, pray to God for us! 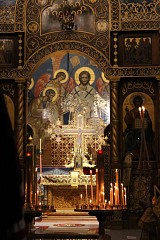