DVD Tutorial: Serving the Divine Liturgy of the Presanctified Gifts

As we approach Great Lent, at the request of several clergy our Diocese and with the blessing of His Eminence Kyrill Archbishop of San Francisco and Western America, the following DVD Tutorial on serving the Liturgy of the Presanctified Gifts is being made broadly available through our Diocesan media.

"This presentation by Archpriest Alexis Kotar of St. Nicholas Cathedral in Seattle, Washington, was originally given at the 2006 Lenten pastoral retreat of the Western American Diocese (ROCOR). It is presented here, enhanced with additional footage of the service, for the instruction and edification of clergy and those wishing to learn about the structure of the Divine Service.

Fr. Alexis begins with the historical roots and development of this unique Lenten Service. His lecture helps us understand why we celebrate this Presanctified Liturgy during Great Lent as well as the relationships between some of the various components. In addition to this, he also describes the process for celebration of this Service in great detail focusing on the actions of the priest in the altar. For this reason, this video is an excellent resource for those members of the clergy wishing to learn more about how to celebrate this Service or as a refresher for those who do not often have the opportunity to serve the Presanctified Liturgy. As many of these elements are not regularly seen by the faithful, this video provides a valuable opportunity to see behind the iconostasis and understand the profound symbolism of this special Lenten Liturgy.

The Presanctified Liturgy which is depicted is served by Archpriest Peter Perekrestov at the Holy Virgin Cathedral in San Francisco during Great Lent of 2006. The video has been produced with the blessing of His Eminence Kirill Archbishop of San Francisco and Western America and under the auspices of the Diocesan Department of Service Rubrics" (Taken from the back cover of the DVD).

Video Presentation on the Liturgy of the Presanctified Gifts
Share This:
News Updates
Announcements
00000 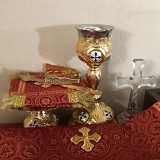