Bishop Irenei of Sacramento, Appointed by the Council of Bishops as Administrator of the Diocese of Great Britain, Visits England 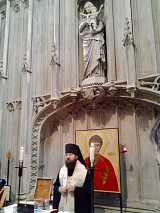 From May 11-22, 2017, with the blessing of His Eminence Metropolitan Hilarion of Eastern America and New York, First Hierarch of the Russian Orthodox Church Outside of Russia and Ruling Bishop of the UK Diocese, His Grace Bishop Irenei of Sacramento, Vicar of the Western American Diocese, made an archpastoral visit to the United Kingdom, heading a pilgrimage with the myrrh-streaming “Hawaii-Iveron” icon on its first visit to the UK, as well as convey the archpastoral blessing of Metropolitan Hilarion to his flock.

During the ten-day visit, Bishop Irenei visited eight of the UK Diocese’s parishes, in both England and Wales, with services in the presence of the holy icon at each parish as well as the celebration of the Divine Liturgy on most days. Additionally, divine services took place in parishes of neighboring Orthodox jurisdictions—including those of the Sourozh Diocese of the Patriarchate of Moscow, and of the Thyateira Diocese of the Ecumenical Patriarchate—and visits were made to many ancient Orthodox shrines.

The Hawaii-Iveron Icon arrived on Friday, May 12, and was greeted with a festal akathist served in the diocesan Cathedral of the Dormition of the Theotokos and the Holy Royal Martyrs in Harvard Road, Chiswick, London. The following day, some 200 pilgrims took part in the pilgrimage to St Alban’s, on the outskirts of London, where Divine Liturgy was concelebrated by His Grace together with multiple clergy of the diocese in the ancient cathedral that stands on the site of the martyrdom of St Alban, the Protomartyr of Great Britain (3rd century). Following the Liturgy, a moleben was served at the shrine of St Alban, where the saint’s precious relics were brought out for the veneration of the faithful. A small talk on the significance of the saint and of ascetical piety was given by the Bishop, and the faithful were able to venerate both St Alban’s relics as well as the holy icon. A festive meal, provided by the Sisterhood of the Dormition Cathedral, was provided for participants on the scenic grounds of the ancient city where the saint had lived.

Following the pilgrimage, Bishop Irenei began a week-long travel to various parts of the diocese, organized by Diocesan Chancellor Archpriest Paul Elliott. This began with the Saturday vigil and Divine Liturgy for the Sunday of the Samaritan Woman at the parish of St John of Shanghai in Colchester—a converted military garrison church that has now become the largest Orthodox temple in the United Kingdom. His Grace Bishop Irenei was joined in the divine services by Archpriest Andrew Phillips, senior priest of the Diocese and rector of the parish. During the services, and on behalf of the Metropolitan, Bishop Irenei tonsured Fr Andrew’s son, Timothy, a reader, and ordained the parish deacon, Father Spasimir Ivanov, to the holy priesthood.

In the days that followed, visits were made to the parishes of St Alexander Nevsky in Norwich (a parish in new grounds), Joy of All Who Sorrow in Mettingham, St Elizabeth the New Martyr in Wallasey (near Liverpool) and Holy Prince Vladimir in Cheltenham — all in England; as well as to the parish of the Kazan Icon of the Theotokos in Cardiff, Wales.

In addition, Bishop Irenei visited the small monastic chapel dedicated to St Panteleimon in Clacton-on-Sea, and the Hawaii-Iveron icon was brought to the chapel of the Life-Giving Spring in Walsingham. At the invitation of His Eminence Archbishop Elisey of Sourozh, Bishop Irenei also concelebrated the vigil for the Sunday of the Blind Man at the Moscow Patriarchal Cathedral of the Dormition in Ennismore Gardens, London, at which many hundreds of faithful gathered to venerate the icon; as well as in the parish of St Nicholas the Wonderworker in Oxford; and with the blessing of His Eminence Archbishop Gregorios of Thyateira, a celebration of Divine Liturgy took place in the Greek Orthodox Church of St Nicholas in Cardiff, Wales.

Following these travels, the visit concluded where it began, at the diocesan Cathedral in London, where on the eve of the Sunday of the Blind Man, His Grace Bishop Irenei ordained Subdeacon Sergei Mironenko to the diaconate on behalf of the Metropolitan; and on Sunday, ordained him to the holy priesthood. A festal meal was organized by the sisterhood for the packed Cathedral, and Bishop Irenei was able to visit with many members of the parish, including the children and teachers of the Russian school. The following morning, an early Liturgy was served in the cathedral’s Lower Church (dedicated to the Holy Royal Martyrs), with the lifting up of prayers for travelers, before the holy icon was taken to the airport and the visit concluded .

Throughout the visit, Bishop Irenei was joined by Protodeacon Dionysius Lvov, cell-attendant to the Metropolitan, as well as Subdeacons Anthony (from San Francisco) and Nectary (from Hawaii, the keeper of the holy icon). The visit was characterized by a spirit of charity and consolation felt in every part of the Diocese, and the fervor of love felt in the presence of the miraculous sign of the myrrh-streaming icon.

In addition to the formal visits, Bishop Irenei and his co-travelers were able to make private pilgrimages and visits to a number of holy places and shrines in England, including visiting the site of St Botolph’s monastery in Iken, venerating the relics of St Chad of Litchfield in Birmingham, visiting the holy well of St Margaret in Binsey and the relics of St Frideswide in Oxford. In addition, His Grace was able to chair a session of the parish council in London on behalf of the Metropolitan, as well as discuss matters relating to the pastoral and missionary work of the Diocese with its Chancellor, senior clergy and others throughout the visit.

This was the third archpastoral visitation to the UK Diocese this year, with its Ruling Bishop, His Eminence Metropolitan Hilarion, already having visited in January and in March. Since the time of the visit, the Sobor of Bishops, which convened in Munich, appointed His Grace Bishop Irenei as Administrator of the Diocese.