18 September 2015: Statement from the Diocesan Chancellery of the Western American Dicoese, Russian Orthodox Church Outside of Russia

With gratitude for those who have offered prayers over the recent disturbance at St Tikhon’s House and Chapel — the former residence of St John (Maximovich) of Shanghai and San Francisco, and currently an active parish —we wish to issue corrections to exaggerated reports of this event that have, unfortunately, quickly begun circulating on the internet.

An aggressive person, who is himself Russian and Orthodox and who is well known in the city for aggressive personal behaviour in the past, had a vocal confrontation with certain persons having a meeting in the church, while in an apparent state of drunkenness. During that confrontation some Holy Water was spilt, and minor damage done to the riza of one icon, which has already been repaired.

There was absolutely no political motivation for the confrontation, which was resolved by the calm-yet-firm reaction of those persons present, and the individual was given over to local authorities who arrived promptly, for his own safety and care. 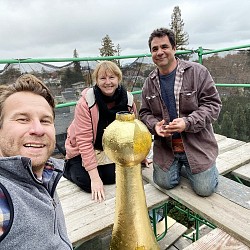