"Becoming the Light of the World" 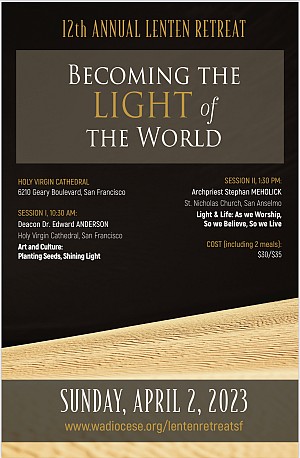 2) Archpriest Stephan Meholick, Rector of St. Nicholas Orthodox Church in San Anselmo, CA
Topic: "Light and Life: As we Worship, So we Believe, So we Live"

Schedule
"Becoming the Light of the World"

Archpriest Stephan Meholick, Rector of St. Nicholas Orthodox Church in San Anselmo, CA
Topic: "Light and Life: As we Worship, So we Believe, So we Live"

Deacon Edward Anderson has been attached to the altar of Holy Virgin Cathedral in San Francisco since his ordination in 2016.  He has written more than 50 articles for secular, religious, and medical publications, with a particular emphasis on culture and the arts.  His work has appeared in Touchstone, The American Conservative, The Claremont Review of Books, The American Spectator, and elsewhere.  He earned an undergraduate degree with majors in Chemistry and German at Oral Roberts University, studied for a year at Albert-Ludwigs-Universität in Freiburg, Germany as an undergraduate, and received his medical doctorate from the University of Oklahoma in 1990.

After a tour as a flight surgeon with the US Air Force, deploying to the Azores Islands during the Somalian conflict in 1992 and to Thailand during the UN-sponsored elections in Cambodia in 1993, he returned to the University of Oklahoma to complete his training in general and urologic surgery.  A Fellow of the American College of Surgeons, Deacon Edward is board certified by the American Board of Urology.  He is currently the Medical Director of Urology at the Monument Health regional medical center in Rapid City, SD, which serves a five-state area.

Matushka Susan Anderson and he became Orthodox nearly 30 years ago, and today divide their time between San Francisco and his native western South Dakota, where he grew up on the family ranch that they still own and manage.  When in South Dakota, they live in the Black Hills mountain range, and Deacon Edward, with the blessing of Archbishop Kyrill, serves at St. John the Theologian Antiochian Orthodox Mission in Rapid City.  He and Matushka Susan have three grown children and are devoted to St. John of Shanghai and San Francisco. Archpriest Stephan has been rector of St. Nicholas Orthodox Church in San Anselmo, CA since the spring of 1995. He was born in 1952 in Northwestern Pennsylvania. As a young boy he served as apprentice to Cantor Peter Kennis who learned Carpatho-Russian Plainchant at St. Nicholas Monastery in Mukechevo, Ukraine. While attending Duquesne University in Pittsburgh he lived with Mitred Archpriest Vitaly Sahaidakovsky and studied chant and choral music as sung at the Great Pochaev Lavra in Volhynia, Ukraine. He was ordained deacon in 1975 and assumed the position of choir director and lecturer in liturgics and Church Slavonic at St. Tikhon’s Theological Seminary in Northeastern Pennsylvania. He received his Masters degree from Marywood College in Scranton. In 1979 he was ordained to the priesthood and assigned to Cumberland, RI. While serving in New England he was appointed chairman of the Diocesan Music Commission.

Fr. Stephan also serves as a consultant to the Department of Liturgical Music and Translations of the Orthodox Church in America.