40th Day from the Repose of Archpriest Ioan Comanescu, February 27, 2022 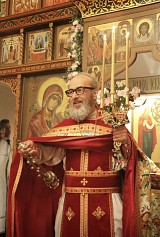 On the 40th Day from the Repose of Archpriest Ioan Comanescu a biography written by one of his children is published here:

Archpriest Ioan Comanescu was born in Cluj-Napoca, Romania on the 28th of May, 1951, to Ion and Hortensia Comanescu. His father, a Colonel in the Romanian Army, was a highly decorated veteran of WWII and was knighted by the king of Romania. During his schooling years, Father Ioan excelled in mathematics and architecture and was accepted into the University of Bucharest to study in the field of Architecture. Over the course of three years, he carefully plotted his escape from communist Romania, and on the 25th of April, 1974, successfully arrived in New York City, USA. He eventually moved to California where he was accepted to the University of California, Berkeley, and later graduated with Bachelor’s and Master’s degrees in Architecture. In the early 1980s, Ioan Comanescu met Priest John Ocaña and was involved in the founding of Saint Herman of Alaska Orthodox mission in Sunnyvale, CA. He met his future, wife, Matushka Efthymia within the local Orthodox community and they later married at the Holy Virgin Cathedral in San Francisco, CA, on the 31st of May, 1987. God granted Father Ioan and Matushka Effie four sons. He blessed Father Ioan with a unique love for life, which he displayed through his devotion to Church, family, and friends. While at St. Herman Orthodox Mission, he served as a reader and then subdeacon. In 2001 he was ordained to the deaconate at Holy Virgin Cathedral in San Francisco, CA, and was immediately assigned to the Protection of the Holy Virgin Church in Palo Alto, CA. Fr. Ioan was elevated to the Priesthood in 2007 serving as a second priest to Father Vladimir Derugin. Father Ioan served in many different parishes throughout the Diocese as needed and he was always eager to help everyone around him. In 2020 he was elevated to the rank of Archpriest. In his last years, Archpriest Ioan bravely fought a variety of ailments while continuing to zealously serve his community. God miraculously blessed him with an additional seven months of life through the intercessions of our Most-Pure Lady (through the Hawaiian Iveron Icon of the Theotokos) and through the prayers of many faithful. Fr. Ioan fell asleep in the Lord on the Feast of Theophany, January 19th, 2022. He is survived by Matushka Efthymia, his wife of 34 years, their four sons, and daughter-in-law.

May his Memory be Eternal! Prayer for the Restoration of Peace
more information >
00002

Donate to Support Refugees and the Suffering in Ukraine
more information >